Very different from the revelations about Zelda and MGS, it’s about time I came clean about my love affair with Grand Theft Auto – or lack of it. To this very day, I have never completed nor even bothered to play a GTA game through to the end.

I’m sure a lot of people reading this will think I’m doing nothing out of the ordinary. In fact, I’d guarantee half the demographic for Rockstar’s biggest franchise actually didn’t know there was any semblance of a campaign past their determination to shag prostitutes and leave them for dead. However, for a game so highly received by everyone and their mums, that is, apart from the Government, why am I yet to complete the main quest-line of any Grand Theft Auto game? The answer is very simple my friends: There is simply too much to dick around with. 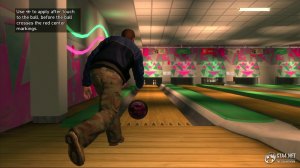 It’s a shame that this is my lasting memory of GTAIV.

To put my lack of GTA experience into context, I can say with full confidence that I don’t know a single plot line from any of the other games in the series, other than a Russian man was in one and you had to make him go bowling. By this description alone, I’m bored to death. After doing a little research on this pathetic little memory, I have now discovered that the game I’m actually referencing is  Grand Theft Auto IV and that my recollection of any further events are either shockingly sparse or non-existent. What I can tell you, however, is that I once crashed a helicopter into the rollercoaster in that game – and I think this paints a good picture of my time spent with the man Niko Bellic.

Apparently, you only go on this bowling date right at the beginning of the game. Which is consistent with my usual GTA game strategy of playing it until the linear missions stop to give me some breathing room. At this point it’s onto the cheat codes and backstreet hookers to generate my own brand of sick pleasure. In fact, one of my fondest memories of playing GTA was when I conjured a tank from thin air, sat in the twist of a multi-storey car park and unleashed full scale war upon any human being who opposed my destiny as the newest recruit into the Horsemen of the Apocalypse.

This image is related to San Andreas but I’m not sure how or why.

This lack of certified experience in one of the biggest games this side of the century was recently spotted by someone I used to consider a close friend. That was, until they decided that the only way to fix this error was to buy San Andreas and play it repeatedly, under constant surveillance, until I could understand the sexual connection they had with such a LUDICROUS GAME. Sorry, I’ll backtrack.

I hated that game. I hated those bikes. I hated those roads. I could not survive past that first bloody bike mission even though I must have tried it over 20 times. This ‘friend’ of mine even suggested playing past the bike mission themselves to ‘unlock’ all of the goodness behind this ridiculous gateway, hoping that the promise of a protagonist who gets hungry and increasingly fatter would in fact invigorate my gaming muscles and get me the fuck on with it. I shut him down immediately. 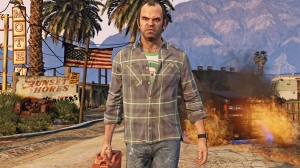 Undeniably my favourite character in the entire GTA series that I can actually remember and base this opinion off.

Since this fuckery, Grand Theft Auto 5 was released upon the world inducing mass panic and euphoria as we were able to play not only 1 male character, but 3!!!!!!!!! I jest, I did actually play some of this one. However, judging that I’m barely halfway through it and am now a) totally procrastinating and b) unable to remember any of the story campaign, I’d say my chances of finishing it are a bit slim. And there is no way in hell I’m starting it again. I’m not made of time.

In fact, the last time I played GTA5 I distinctly remember trying to fly a helicopter under a bridge so I could parachute out and collect a hidden part of a spaceship. If that doesn’t demonstrate my attitude towards Rockstar’s abilities to create an immersive narrative campaign I don’t know what else will.

Why? Well I can put it down to two things: I’m lazy and drastically unmotivated by large scale video game narratives. I still to this day believe that there isn’t an official ‘end’ to an Elder Scrolls games, and that no human being in this current climate of life expectancy will ever reach the campaign climax. Oppositely however, I can’t get enough of the Saints Row series. As much as I fart about with all of the side missions and mini-games, nothing makes me happier than overthrowing the alien Zin Army through my avatar as the President of the United States. How fucking glorious does that sound to read?! 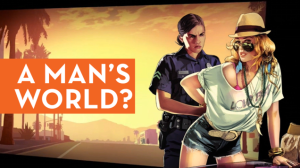 No, it’s everyone’s world. This isn’t a fucking Yorkie advert.

I can tell you for certain that I have never avoided a GTA game based on a stupid reason like, oh I don’t know, the fact that my gender grants me the ability to boycott things (whoooooooooooops). I’m not a fan of calling other people out on the Internet but this is just absurd. Grand Theft Auto is a triumphant and satirical look in an American culture we’ve all stupidly let fester too long.

This particular individual needs to stop taking everything so personally because they live in a world where video games, for them, ‘glorify psychopathic behaviour and the mistreatment and objectification of women’. I’m sorry love, but as far as I’m aware, this is a game and not an instruction manual.

Round up? I’m a terrible person who claims to love everything video game even though she rarely finishes or even engages with iconic narratives. On the other hand however, if there was ever employment for somebody who was required to play all those side missions you couldn’t be arsed to complete – give me a call.