I’m hoping this Confession will resonate with a lot of you readers out there as I drop a bit of a bombshell on y’all. Theme Hospital, in my honest opinion, was the pinnacle of PC Gaming Greatness.

I mean, are you even going to bother trying to argue? You cannot, honestly, open up a dialogue with me if you’re prepared to fight the corner of Theme Hospital being anything other than gaming perfection. You’d be demented.

So as I stand unopposed on one of the most ludicrous opinions in the industry, let me take your baffled silence as a sign to continue with my train of thought – Theme Hospital is literally everything I have compared all PC gaming experiences to in the last 15+ years of my life.

It all started when my family got that big bulky machine that we shoved into the ‘family room’ and decided to call a computer. It made more noises than a fucking symphony orchestra and took at least a year to warm up, but that stupid machine was my gateway drug into gaming. And on it I attempted to play a series of strange games from this ‘PC Game Bundle’ that teleported into our house, because I’m sure as shit no one bought it. 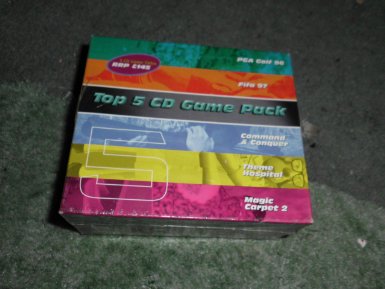 You’re looking at the actual drug I took over 15 years ago. This is my life right here.

Now we’re going to come back to Command & Conquer at some point as it needs to be acknowledged as my second favourite PC game of all time, but I’ve already started this Confession about Theme Hospital and dammit that’s what we’re going to stick with.

As a new kid on the block of gaming back in the early 00’s, I thought my skills would be less tested in a hospital simulator and decided to challenge my wits on that one first. I can remember to this day every single beat to the start-up cutscene where the camera flew around the hospital, and the devil was in the waiting room, and then that doctor freaking Clark Kented his shirt. It was all so magical. See for yourself below…


Trippy, amirite? Can we even talk about the fact the surgeon ejected that guy in surgery because he was flatlining but then he was a-fucking-wake and screaming down that pit?! Don’t try and wrap your head around it; it’s not crucial to even begin to understand this game, just know it’s perfection.

For those TERRIBLE people reading who have never played Theme Hospital (to which I’ve just discovered I’m sitting next to one of the heathens and I plan on changing his future very soon), the whole premise is to start a hospital from the bottom up until you win shitloads of awards and they promote you to a bigger establishment. It was addictive and surprisingly frustrating how sharp that difficulty curve started to get after your first 3 hospitals.

Just look at all that sick!! WHAT A GAME! TENOUTTATEN.

The doctors were lazy assholes. The nurses always wanted more money. And there never seemed to be enough time or money in the world to pop the heads of all the bastards with Bloaty Head Disease. Whats more, the plants were demanding sons of bitches and needed a fresh drink of water every 3 minutes. Basically the game just dragged you for not being able to multitask very well.

But it was SUPER fun to play, especially when you could just randomly shoot up rats throughout your hospital or try to stop the devil stealing away your patients by surrounding him with fire extinguishers. (I’m really not selling this game to you, am I?)

The point boils down to this – nostalgia has written this entire article. Once more, like with Legend of Zelda, the idea of nostalgia and childhood games has severely effected my thought process, so much so that I’m trying to tell you that Theme Hospital is a gaming treasure and needs a 20th Anniversary edition in 2 years time. Which is a fact that, on its own, is making me sick. 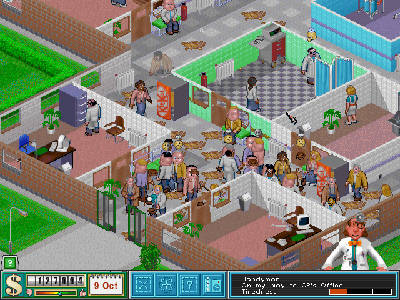 I promise you this game was a hospital simulator, and not just a ‘Clean Up The Sick’ simulator.

So what’s the point in all this malarkey when Theme Hospital was a pile of wank and we can’t trust people’s opinions anymore because childhood love affairs will always get in the way? Well, that’s it. Right there, you just said it. People will always continue to have opinions about games based on the intimacy they felt for it during their younger years. And that’s a fact people need to hurry up and appreciate.

If someone came up to me next week and said, ‘oh hey Charleyy, so I think ET is amazing game and I’d really like to tell you why’, I’d be all ears. I’d be so super curious about why the heck they thought that, that I would pull up a chair and sit the fuck down. Tell me your thoughts wise traveller, I am not here to judge you.

So when I tell you that not only is Theme Hospital the first game I ever played on PC, and not just the best, but one that I will continue to compare all PC games to I hope you’re able to see where I’m coming from.

I was going to use the cover when he’s being felt up my a nurse, but thats a terrible representation of the medical profession. I won’t allow it.

For me, there was no happier time in my life/day/hour than when I was sat on the computer with an egg timer next to me as I got 60 minutes of computer time under my belt. I wouldn’t give a shit about playing the introduction millions of times over and over, nor would I care about my hospitals being shitty and never winning awards. I simply loved being in that moment and playing that game. I truly believe it changed my life.

So please, if you’ve read this far and aren’t exactly sure what you want to take from this article into the future, please take to heart this final message: Don’t base the critical appeal of a game on it’s technological statistics and Metacritic score, sometimes you just gotta play a crappy game and absolutely live your best life.

Shout at me on Twitter, Facebook or down below your thoughts on Theme Hospital, and tell me if you have any games that strongly match my opinion on nostalgic games!

One thought on “My First PC Game Was Theme Hospital”