This week we get philosophical and talk about ethical choices in video games. In Summary: I form higher emotional bonds with animals than I do humans.

Whether you like Peter Molyneux or not, everyone can pretty much agree that his name is up there with the likes of Gabe Newell (Valve) and Bobby Kotick (Activision) as key players in the gaming industry. Some may like his over-enthusiasm for his games, seeing that the bloke just really enjoys what he’s doing, whilst other people find his egotistical attitude rather irritating. But regardless of how you feel about the chap, he’s not done too bad for himself.

In Peter Molyneux we trust.

A brief back catalogue of games for those people unsure of exactly who this person is will get you all up to speed on what a champ Peter is: 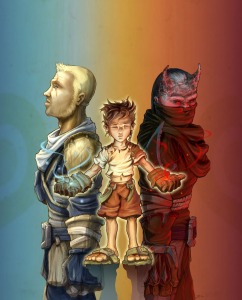 It’s your choice; I just preferred the Dark Side.

Notice a pattern there at all? Yes, Peter seems to enjoy making the player suffer under the weight of incredibly tough ethical and moral choices. Whilst some of the games don’t make this division so prominent, it’s clear that games like Black & White and certainly Fable require the player to truly think about their actions and how they want to shape their gaming experience. And it’s here that it becomes a common talking ground for gamers across the world – at the end of Fable 2, what did you choose?

Congratulations on you if you remember the title of the article and know that I picked the damn dog, but why is that so significant? What were my other choices? Well, I’ll set up the scene for you.

From start to finish, you, the player, are required to complete numerous missions as Sparrow in order to save the people of Albion from Lord Lucien, as well as having the freedom to roam about your environments to purchase property, shag all the locals, raise a family or strike terror into the hearts of the young. It is ENTIRELY your choice how you play this game. Oh, and you get a dog. Like, the best dog ever, who follows you everywhere and attacks when you attack and performs tricks on command. 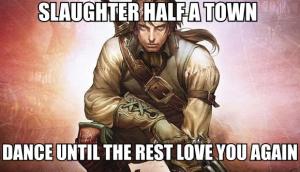 The only motto to live by in Fable 2. For me, anyway.

So you go through the whole game, doing good or doing bad. And eventually you realise (as was the case with my playthrough) that Sparrow got really fat, really ugly and REALLY veiny. I was a bad girl.

One of my favourite past times (leading me to be known by the title ‘Nobhead’ because EVERYONE hated me for this exact reason) was standing in Bowerstone Market, performing a lovely jig with my best friend Mr Dog and attracting a significant crowd of people before switching off the safety controls and raining a plague of death and destruction upon them all. Children were often present. MY children were often present. It was hilarious.

So unfortunately for me, I never made much of a bond (unless you count the sexual kind) with the population of Albion, choosing instead to walk through the towns of peasants and smell fear in the air. I’m good in enough video games, this time I wanted to be the fucking worst.

But now it’s the end of the game. You take down Lucien [SPOILER] with a music box [SPOILER], and get one of three wishes. Do you,

We all know what I chose. That dog was my best friend, in game and IRL. I killed for boredom, but pet and loved that dog in every free minute I had from terrorism. And this is why games like Fable come as great ice breakers between gamers and players alike, discussing your final choice or style of gameplay in these modes of video games are truly eye opening and open you up to a world of gameplay you may never have uncovered otherwise.

Take Heavy Rain for example, you can spend on average 10 hours completing the main story line, but one simple choice different to your friends and you may be on totally different narrative paths. With an estimated 30 hours of playable story on one disc, that game is truly your oyster and it encourages players to talk about what they eventually saw.

In conclusion; I’m a bastard. Fuck Albion. Gimme the dog.