Sure, it’s a scary game. That’s the point right? Well amidst all the jump scares, necromorphs and piss-piddling moments, there begs a serious psychological question – why am I so fucking scared of Dead Space?!

A bit of exposition here – I played all of Dead Space 1. A feat I’m not even sure I can believe, but somehow I reached the end of that torturous disc of evil and survived to tell the game. So, rather naively I can now admit, I bought Dead Space 2, and it wasn’t that long until I quit and walked away from it completely. 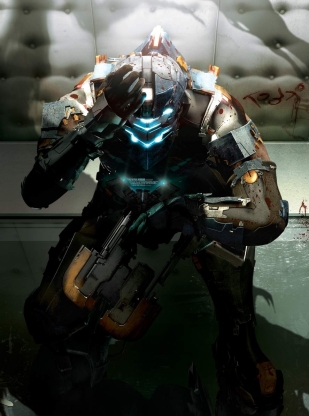 Oh Isaac, it’s no wonder you have PTSD. I’d recommend a trip down to the local Jobcentre.

My Xbox Gamertag says the the last time I launched that disc was in… 2011. The year it came out. So yeah, it’s basically dead to me. But I’m certain this boils down to something more than a deep hatred for necromorphs. And aside from the stomach churning segment in Dead Space 2 where Isaac was required to shoot aliens not too dissimilar to dead babies (way too close to home for me), I’m pretty sure there’s a reason video games are far scarier than films. So lets educate ourselves.

Firstly, let me introduce myself; I’m Charleyy Hodson. In my free time I like to watch movies that are typically not for the weak stomached and I pride myself on the extensive list of ‘sick’ and ‘scary’ movies than I have sat through. I’m fine with them. I’ve not come across a horror movie that has unsettled me for a long, long time. In fact, I only briefly got panicked by the sheer amount of suspense in Paranormal Activity 3 due that fucking oscillating fan.

YOU KNEW IT WAS GOING TO SCARE YOU. WE HAD TO WAIT LIKE 5 TIMES FOR IT TO FINALLY DO IT. IT SUCKED.

But unlike movies, video games scare the literal shit out of me. I’ve played a cumulative total of 3 minutes playing Slender, and that was only until I got the first page. I then promptly switched the game off knowing that Old Man Slendy was on his way. Jesus, even Bioshock I had to turn off because the Big Daddy gave me the willies. (heh…)

Single handedly one of the most panic inducing moments of life. Trust me, I’m a mother.

The most embarrassing example of this type of anxiety towards video game terror was in the form of recently cancelled (for why, I’ll never know) Silent Hills playable trailer. Oh my gentle jesus. I watched a YouTuber play through the trailer because, obviously, I didn’t want to experience it myself. But I had to watch them play it over the course of 3 days because of the amount of times I had to pause it and run away cowering. It was terrifying.

And here’s my theory why. A film is a piece of entertainment quite unlike video games. Typically you WITNESS the bad, horrid things happen to actors and actresses through CGI and inferred camera angles. It’s easy to remember it’s not real. If that doesn’t work, just look away from the TV. Switch the music off, that helps as well. (If you’re a freak like me, you can predict the scary bits in the film because the sound normally gives the game away. I ruined Insidious for my sister by playing this game in the cinema.)

No HUD? Count me out. I’m not an idiot. Death is the only thing down that archway.

In contrast, video games required YOU to EXPERIENCE that terror. That feeling of horror is so powerful because we, the player, is not being told the story of mysterious and gruesome events, most of the time we’re being made to interact with it. And if they’re effective, a player like myself can get so into a game that the fear from simply stepping around a wall is enough to make them physically shake and sweat.

Taking this back to Dead Space 2 briefly, lets look at what those bastards at Visceral do to us: there is NO HUD (Heads-Up Display) meaning that the player has very little distraction taking them out of the fully immersive experience; as necromorphs begin to jump out of any hollow container possible, the player beings to stop trusting their environments and fall to sheer dread at the sight of an air vent, knowing that they may be able to be attack; and finally, those fucking babies – see embedded image… /shudders

Amnesia does it. Penumbra does it. Hell, even Resident Evil does it. With great gaming Developers, comes great power to terrify. And I’m glad those people are in the business. Because of how much I enjoy watching horror games to test my nerve and bladder, I think I would be a bit disappointed to find that games couldn’t scare me as well. It’s nice to know I have a limit. And a soul.

One thought on “I Mentally Cannot Play Dead Space.”