Everyone has something they’re not good at, and this week I reveal how terrible I was at doing the most fundamental task in Fallout 3: walk outside and live.

Just remembering this time in my life makes me so massively angry. Imagine, teenage me rushing home to play the newest most exciting video game released in 2008 (because let’s be honest, I’m too pussy for Dead Space and I was only going to dick about in Grand Theft Auto IV). And as soon as that bit of plastic hit my console, I was in love. And not just with Liam Neeson. 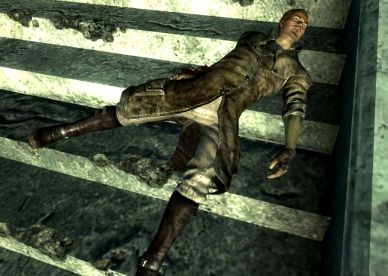 An accurate representation of the time I spent in Fallout 3.

Your  life then flashes before your eyes until you get to the vital RPG customisation moment, in which I spend damn near an hour getting my ‘Me’ as perfect and ready for life outside the Vault as possible.

Next up we have your tenth birthday party where your dad decides it’s time to give a prepubescent kid a BB Gun. Then you’re thrust back into the classrooms we all know and hate from our childhood and are forced to take the G.O.A.T test, a clever trick by Bethesda to craft our character without even acknowledging it. And then shit gets real.

Alarms buzzing and armed with the knowledge that your dad has fucked off out the Vault without a kiss goodbye, suddenly you’re in a world of panic armed with ten bobby pins, your trusty BB gun and a baseball glove. On your quest to find answers, the world of the Vault becomes your oyster as you can choose to help or abandon everyone around you. At this point I did make the quick decision to shoot Butch in the back of the head, but regardless of that prick the game moves on, with a myriad of people and items to save/kill/loot. Just in time for your escape. 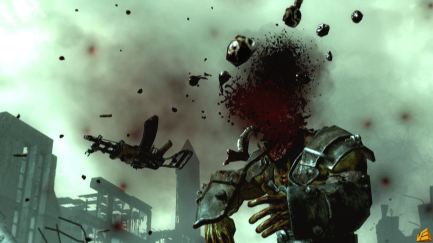 An even more accurate representation of my time spent in Fallout 3.

Following a tunnel that’s begging to collapse, you take your first steps out of the Vault and witness the beauty of the post-apocalyptic world outside your front door. And it’s awful.

The environment wants to kill you. The animals want to kill you. Even the people want to kill you. It’s chaos, and little old you is armed with a measly pistol and a bright blue jumpsuit as you’re just thrust into the middle of it. And this is where my hopes and expectations for the game fell apart.

On not one, not two, but three attempts I died within five minutes of leaving Vault 101. I was inexplicably awful at navigating the wasteland and, well, surviving. It took a solid amount of effort and focus to make it successfully through my first missions in the big wide world. But that’s not what you came here for. Lets have a look at how it’s even remotely possible to fuck up leaving a Vault back in 2008. 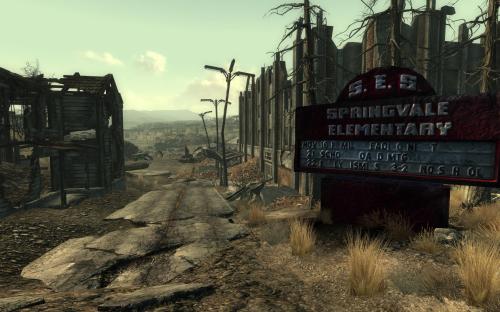 When I read into the environmental walkthrough of Springvale, I was informed that this town is relatively empty. There’s an Enclave eyebot and a young lady called Silver hiding in a house somewhere. So what possibly killed me? Well, it was a combination of idiotic actions on my part.

As the very first place I visited after leaving my safe little cave (it’s important to note here that I collected next to nothing during my purge from the Vault and was in desperate need of supplies before I continued the main quest line), I was incredibly apprehensive and nervous about how the wasteland would treat me and how I needed to behave in this desolate environment. Foolishly, I went to the Springvale Elementary School first.

Here I was greeted with gang graffiti, a half blown up school and nearly a dozen raiders waiting to kill me for being too nosy about their underground tunnel. If the giant ants weren’t enough to kill me, these certainly were as it quickly dawned on me how fucked my Lone Wanderer was going to be in this  world by having me as its controller. I died almost instantly. I never returned. 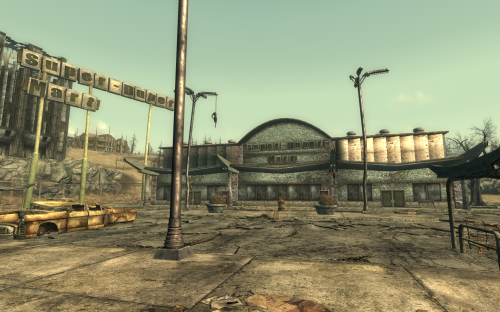 After a quick respawn, I decided to avoid the charming village of Springvale and head for first stereotypical ‘apocalypse looting ground’ I could see. This turned out to be the Super Duper Mart. And fuck me was it anything but super or duper.

Again, doing my research now, I go to the Fallout Wikia to remind myself of what was happening down at the old supermarket and the first paragraph ends with the crux of my second post-escape demise: “It is completely overrun by raiders”.

Those assholes tricked me into a false sense of security. I rounded the corner upon the Mart, counting my lucky stars that I had stumbled upon something so perfect for my looting needs. I stand in the doorway, look across the car park at all the dangling bodies and see some people and their friendly dog across the concrete to greet me on my travels. Naive was clearly an understatement.

I didn’t even make it inside the Super Duper Mart y’know. And I never went back. I was absolutely destroyed by the raiders and their pup to the extent that I decided never to visit that part of the game again. It was embarrassing and I was certain I would find my deflated ‘LOOK HOW GOOD I AM AT SURVIVING IN THE WILDERNESS’ ego lying broken and abused in one of the disabled parking bays. At this point, I decided to just go and play the actual game, I was clearly not destined to be adventurous in this version of Washington DC. 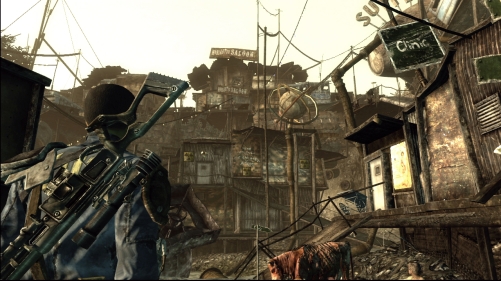 I finally made it to Megaton. After the initial apprehension and fear upon seeing the large metal walls and massively fortified structure the game was asking me to enter, I stopped and asked myself: Can you actually fucking play this game Charleyy? Are you actually capable of finding your balls and trying a little harder to survive this thing? I searched deep, found the required balls, and took my first steps inside. After a heated encounter with Lucas Sims, I move about the village, talking to locals and uncovering news about my father’s whereabouts. Here, I begin my descent into inevitable death.

I enter Moriarty’s Pub. I have a lovely chat with a prostitute named Nova and hold brief conversation with some of the locals. But then something reaaaaaaal bad happens. I accidentally unholster my weapon. People freak the fuck out. Everyone started shouting ‘whoooa not cool man’, and before I knew it I’d shot the bartender and was being chased out the city. Literally chased.

I never made it to the front gates and I knew my playthrough was totally fucked at this point. And so I rage-quit and restarted the whole damn game again. Shot that Tunnel Snake bastard Butch once more and attempted Megaton again on a much more controlled anxiety level. But don’t worry, I set that moterfucking bomb off in the end and got my comeuppance.

And that’s my little story of ‘The Time I Fucked Everything Up In Fallout 3 But Please Don’t Think Lesser Of Me Because Honestly Mister I Am Good At Games And I Want You To Take Me Seriously’. See y’all next week for another episode of just how badly I suck at everything!