In previous Confession’s, I’ve discussed my overwhelming desire for collectibles and game completion. So let kick this up a notch and talk about sheer obsession.

If you’ve played World of Warcraft before, you already know that there’s a lot more to the game than just gallivanting around as a wizard and firing spells at baddies to win some XP. There’s a great deal of complexity involved regarding the design and build of your character, the daily grind in PvP Arenas or Dungeons to improve your armour tier, and the feeling of world domination when you and 39 friends take out the toughest Raid boss the game has to offer. World of Warcraft truly is an experience.

The feeling of genuine euphoria captured in a video game. How poetic.

If you haven’t played World of Warcraft, then I’m sorry to tell you that this Confession won’t be about my escapades in the wilderness or that one time I single-handedly annihilated a Battleground. No, this Confession is about the other side of World of Warcraft. The side where I once spent 7 days fishing for pixelated coins in a fountain just so I could get a couple of achievements.

You see, World of Warcraft, without sounding like a fanboy, really is a world in itself. Unless you play as a Mage class and can conjure Portals across the map at will, you’ll find yourself travelling via Zeppelins, Trams and even on top of a Gryphon as the scope of the game takes place over 4 separate continents. They don’t call it an MMORPG for no reason. In your down time, you may find yourself interested in various skills such as Cooking, First Aid or even Tailoring. But if you really want to impress your friends and boast about your online credibility, why not fish up 52 totally unnecessary coins from a fountain that is otherwise redundant? Oh yeah, can’t you just feel the sexual tension rising??

The truly expansive world of Azeroth. Just look at all that water, ripe for fishin’!

In hindsight, I don’t have a fucking clue why I did this to my life; I didn’t unlock any special gear or over-powered weaponry; I didn’t earn any valuable XP; and I certainly didn’t get a bombardment of ‘Congratulations’ in my Guild Chat for sharing my accomplishment. In fact, all I did get in response was a very close friend replying simply, ‘Oh Charleyy…’

Even Blizzard themselves make it VERY clear that the achievements and the in-game rewards you receive after completion are “purely cosmetic and just for fun”, so why did I not just stop after fishing up just one of the stupid bastards? Well, you see, I’m very easily addicted to things.

In the past, I have admitted to not finishing or even starting games. I’ve admitted to playing a game halfway through and just abandoning it. But when I like a game, and I mean reaaaaaaaaaally like a game, I will play the living shit out of it. In fact, this unhealthy drive to collect trinkets and other meaningless crap nearly drove me to insanity in the very first installment of the Batman Arkham series, when I rummaged around online walkthroughs to help me collect all the damn Riddler trophies. 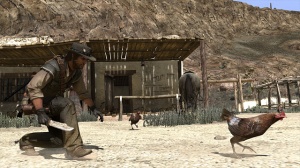 If hunting bears and cougars isn’t your thing, the game devs have you covered…

Another example of me taking extreme video game hoarding to the max came in what I still to this day call one of my favourite games of all time, Red Dead Redemption. Away from the stunning good looks of Mr John Marston and before I embarked on that tear-jerking sprint on the back of my horse towards the end-game, I was fucking about in Tall Trees trying to kill bears with a melee knife. I was also deeply interested in gathering plants and herbs in order to unlock the ability to make my own tonic. Furthermore, I invested much of my time into treasure hunting and trying to shoot the hats of random citizen’s heads. What a game that was.

I suppose the only positive I could take from all of this distinct wasting of valuable human life is that I had an unthinkable amount of fun completing them. In my own life, when nothing exciting was happening and I was often sat with my own thoughts, video games such as World of Warcraft and Red Dead Redemption were there to keep me busy and make me feel like I may have achieved something significant on days when I felt utterly unfulfilled.

It’s sparkly to try and make you feel better about winning it.

What’s more is that none of these games judged me for wanting to fish up all the coins in a fountain, or for trying to one-shot a great fucking bear in the middle of the woods. It was implemented into the game by the nice folks in their studios knowing that poor saps like me would eat it up alive. And whilst these are typically the type of things I won’t boast about at cocktail parties, I know some people out there will agree with me that there is absolutely no better feeling in the world like having a huge collection of obscure achievements under your belt.

So the next time someone is giving you hell for not doing something in your office IRL, tell them you once took down ‘Lobo the Legendary Wolf’ and that they can shove the expense reports up their fucking dickhole.