Fantasy games aren’t so fantastical if you unquestioningly choose the same race/class every single time. Do I ruin my own gaming choices? Do I have underlying psycho-sexual reasons for doing this?

One of my favourite genres of video gaming ever is fantasy, but more specifically along the lines of a fantasy sandbox creation in which you can develop your own sense of character and game progression style. Endless skill building, aesthetic design, a wondrous world of quests and cadavers to pass away my days within. And yet, here I am, rolling another Blood Elf.

A Lord of the Rings Online elf wielding the most phallic of symbols.

World of Warcraft. Skyrim. Lord of the Rings Online. Even Runescape for fucksake. Always a magical elven creature of some description. A tall, slender, leggy blonde with fiery fists of fury and skintight armour hugging my powerful frame. Apparently in fantasy games, I always create my fantasy woman.

[Important Note Here: This is not a discussion into video game representation, which is an issue all in itself. Instead, this is a look at why we choose the characters we do, and perhaps what it means when we make repetitive choices of race type.]

But why is this so? Why is it that in a world in which I can literally be ANYONE and ANYTHING, do I always recreate the same old character types and play through games so similarly? Are you ready for this? I actually did academic research on this shit.

First of all, I’ll give you a brief introduction as to why I always choose an Elf, minus the ‘fantasy woman’ analogy I creeped on you before. To me, there is nothing more fantastical than the Elf (often portrayed as the ‘Fairy/Angel’ as varying types of magical humanoids). As well as this, they always translate to be the most magical class to me, and whilst I’m aware I’m plugged into a fantasy game, I can’t believe in a fucking strongman-looking human race wielding magical powers. It just doesn’t sit right with me.

Unfortunately however, these races normally fall victim to the Male Gaze theory in which the same race of creatures, be it aliens/monsters/robots/elves, often fall victim to the trope of ‘Men are Generic, Women are Special’ treatment. If you want to get really technical with this, this gender treatment in almost all forms of media creation as well as our own societal norms is called ‘androcentrism’ and is quite funny to spot once you know about it. Take the World of Warcraft Elves both Blood and Night variation, and have a look at the handy graphic supplied below.

Don’t believe me, check out the visual aesthetic and sexualised differences yourself. Here are the very simple, non-specific searches I put into Google Images:  Blood Elf Male – Blood Elf Female – Night Elf Male – Night Elf Female. The ‘male’ is typically depicted as the ‘normal’ version of it’s race type, whilst the female is demonstrated as a special version with features enhanced to make them recognizably female, either through enhanced mammaries, child bearing hips and costume design that leaves little to the imagination.

So if gender and representation theories point out that the female version of digital races is often sexed up, why do I always chose her? Well, I looked at numerous academic sources to get some sort of clarity to my questions. 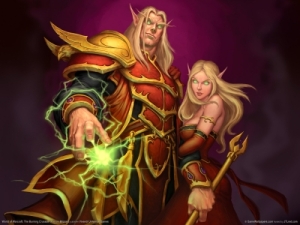 Either male or female, you can’t disagree that the BELF’s have that whole ‘unfairly attractive’ vibe.

This article is created in regards to gender stereotypes and expectations in video game fantasy worlds, with men typically playing characters who ‘like to battle monsters up close’ and ‘like wearing strong armour’. Opposite to this, they state that females ‘like supportive roles’ and ‘choose squishy cloth wearing characters’.

Whilst their research mostly focuses on character class selection, it raises interesting points regarding the ‘softness’ in battle style that each gender chooses. Their results demonstrate that females often play more fantastical class types (e.g less based in reality, such as rogues and warlocks) and play the ‘hardcore’ battle types far less often than men.

Personally, I’m not sure whether I totally agree with article, especially as it only did a cross section of 47 people who play WoW out of the possible 12 million available. It does however seem to align with my constant need to select magical female characters based off the power it gives me to defeat enemies without the need for hand to hand combat, which I found was an interesting gender perspective – judging that the men were described as needing to ‘rip them to shreds’.

She may seem powerful and protected, but one gust of wind and she’ll get a rotten cold.

This article takes a look at the archaic design of racial types in fantasy games and a designers need to strongly base ‘non-human’ characters off monolithic and singular versions of actual humans. This, in my opinion, is one of the strongest arguments I can apply to my own race choices in fantasy games as I have absolutely never (and absolutely WILL never) choose the humanoid race in game unless it is the only option. To me, the fantasy genre thrives off it’s freedom to delve players into other realms and kingdoms that are outside human reach, so why the fuck would someone dull that down by playing your average Joe??

Let’s look at Skyrim here to underline my point some more. All humanoids (Breton, Imperial, Nord, Redguard) have racial abilities that are restricted to elemental resistance – be it Magic, Frost or Poison – or extra luck in finding gold. Wow, how mind blowing. In comparison, look at Elven characters (Altmer, Bosmer, Dunmer, Orc) and Beast characters (Argonian, Khajiit) and tell me you wouldn’t rather have extra Magicka, higher unarmed damage, water breathing, claws and a resistance to disease. It’s not even on the same plains.

Magical races are far superior to human-based ones. This then means it makes my choice easy in video games, once you cross all the human characters off the selection screen, you’re left with the best possible options for fantasy gameplay – but this still begs the question, why an Elf? 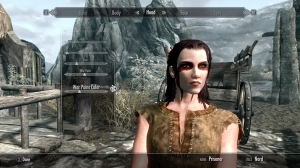 Modern video games have us designing our avatars down to the shape of our goddamn eyebrows. #relateable

This is a 339 page PhD dissertation,  and trust me I didn’t read this whole fucking thing. Instead, I found relevant chapters on the strategic choices players make in video games based of a need for identification – or identification subversion.

Whilst acknowledging the specific in-abilities that come with gamer character selection in titles such as Marvel vs Capcom and Soul Calibur, it does begin to weaken its point when suggesting that choosing not to play as Zoey in Left 4 Dead is the best choice because she ‘is smaller so you can shoot around her’… Yeah. It’s on page 177. I really did not make that shit up.

The dissertation gets really focused when it begins on the angle of ‘creating characters/avatars’. It identifies what I believe every single person who has ever touched a fantasy game can agree with – you get far more attached to these pixels than you would do for any others. Even when they are not created in our own image, personalised avatars and non-set characters demand far more ownership from the player, thus affecting their overall choice in regards to racial types – just take The Sims for pretty sound evidence on this.

Looking at this argument from another, deeper perspective, if I chose the Worgen race in World of Warcraft, it’s certainly not because I look very similar to Werewolves or that I maintain a healthy amount of hair on every part of my body. Instead I may choose it because of their increase strengthen and aggressive exterior – something I may identify with on a personal level.

So back to my love affair with Elves, do I choose them because as a tall, curved female IRL I can see myself most closely relating to that of a Blood Elf, or do I choose her because I strongly desire the racial ability to be magical and ethereal? Even if we stop talking about the obsessive nature of my RPG character rolling, it’s certainly an eye-opening look into the way I play video games and have encountered them over the last 2 decades.

If I’m going to fantasise a relationship with Legolas, an elf is my best bet.

What I can apply to my in-game choices may stem heavily from my real world hobbies and interests, and most importantly those belonging to my eternal love for Lord of the Rings and magical/mythical beings. In fact, maybe the main reason I choose to play as elves is because I read and watch them so much in media products I often recall as my ‘favourites’.

What’s more, my incessant need to play as an elf also demonstrates my reluctance to experience a fantasy title from another perspective. For example, in previous iterations of the Elder Scrolls franchise, I have always opted for the Elven race of Altmer and coupled it with the class of Mage, a combination that’s as old as your mom.

However, everything collapsed in on itself when I decided to shake things up for a bit in Skyrim when I instead chose to play as a fucking Khajiit with a warhammer. Trust me, I took one look at my first dragon and realised the error of my ways. And that was it, I abandoned that game file. There was no point in trying to respec myself, as I just felt defeated. Why did I ever stray from my perfect old pattern of character creation??

Whilst favouritism is always going to come into people’s mind when they create in-game avatars, breaking this habit is often the most overwhelming choice a player has to make if their preferred race is no longer available – just look at the treatment the magical realm receives in the Souls franchise either by being OP (Demon), nerfed (Dark)  or minimised completely (Bloodborne). So for me, following my crippling embarrassment at the hands of a pixelated dragon in Skyrim, I shall be sticking to my magical elves and I shall be fucking content about it.

TL:DR? Play as you want in video games. Make an idealised version of yourself or make your dream girl, but play it however you desire. And most importantly, don’t shout at me in Raid Chat for rolling a DPS based Blood Elf Fire Mage because you prefer Tauren Prot Pally’s.

2 thoughts on “I will always roll a sexy blonde Elf.”